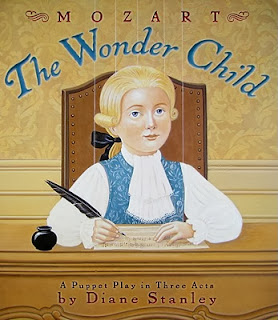 The life story about the brilliant boy who grew up to be one of the greatest composers of all times and the struggles he endured along the way. Stanley portrays Mozart’s turbulent life as a marionette show, inspired by the famous Salzburg Marionette Theatre.

Manjiro: The Boy Who Risked His Life for Two Countries by Emily Arnold McCully (Farrar, Straus and Giroux, 2008)

The
story of a boy who is saved by a whaling captain (Whitfield) after his
crew’s boat shipwrecks on an island in Japan. The captain takes Manjiro
back to America and educates him. Later as a young man, Manjiro returns
to Japan and plays a pivotal role in opening trade between Japan and the
Western world.

The house where Manjiro lived with Captain William Whitfield is now a museum in Fairhaven, Mass. Visit the Whitfield-Manjiro Friendship Society Inc. website to discover more and follow the Manjiro trail.

Told in first person, Mozart’s life is center stage in this story of his struggles and creativity.

The Mozart Project offers a biography, compositions, selected essays, bibliography and links to all things Mozart.