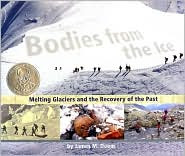 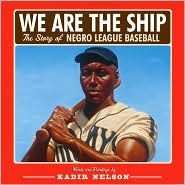 Congratulations to this year’s Sibert Award winners. We are the Ship is outstanding. I am amazed at the crisp details of the portrait quality illustrations. Truly one of the most stunningly illustrated books I have ever seen. I look forward to picking up the Honor Award books next.

(The following descriptions are from the American Library Association website)

The Robert F. Sibert Informational Book Medal is awarded annually to the author(s) and illustrator(s) of the most distinguished informational book published in English during the preceding year. The award is named in honor of Robert F. Sibert, the long-time President of Bound to Stay Bound Books, Inc. of Jacksonville, Illinois. ALSC (Association for Library Service to Children)administers the award.

2009 Medal Winner (check out the video clip of author Kadir Nelson)
We Are the Ship: The Story of Negro League Baseball by Kadir Nelson (Disney-Jump at the Sun, an imprint of Disney Book Group)

The fascinating and well-documented history of Negro League Baseball told in the voice of an “everyman” narrator. )The book captures the spirit of these larger-than-life men who loved the game, despite the prejudice they faced.

2009 Honor Books
Bodies from the Ice: Melting Glaciers and the Recovery of the Past written by James M. Deem (Houghton Mifflin Company)
Bodies from the Ice explores the archaeology of glacier science. Deem’s visual presentation engages readers through period newspaper illustrations, paintings, maps and photographs of ice mummies and artifacts from four continents. Twisted bleached bones, sacrificial victims and legendary climbers are the pinnacle of this en”GROSS”ing account.

What to Do About Alice?: How Alice Roosevelt Broke the Rules, Charmed the World, and Drove Her Father Teddy Crazy!” written by Barbara Kerley and illustrated by Edwin Fotheringham (Scholastic Press, an imprint of Scholastic, Inc.)

Growing up as the daughter of the President was not easy, but being the President and father of Alice Roosevelt was not easy either. Barbara Kerley’s playful use of language and Fotheringham’s rollicking illustrations converge to introduce energy and outrageousness in “What to Do About Alice?”

Quote for the day: “The man who does not read good books has no advantage over the man who can’t read them…—Mark Twain