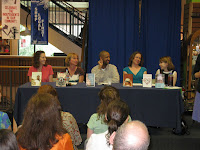 Five Austin authors gathered today to speak to a standing-room-only audience at Book People about “Everything you ever wanted to know about young adult literature but were too afraid to ask.”

The Delacorte Dames and Dude, as they have billed themselves, were colleagues before realizing they shared a publisher, Delacorte Press. Now, they occasionally unite in a unique alliance that promotes each of their diverse titles. April Lurie, Shana Burg, Varian Johnson, Jennifer Ziegler, and Margo Rabb have become an endearing nucleus of friendship and mutual support.

Today, the panel was moderated by respected adult author, Sarah Bird. The DD&D began by discussing the blurred line between YA and adult novels. Lurie mentioned that YA language is no different than that in an adult book, with occasional exceptions. The content, too, is controlled only by editor tastes. In fact, many authors write with the adult market in mind only to have the publisher decide to market the book as Young Adult. As Johnson pointed out, today YA seems to be more of a marketing term than an indication of a book’s content or characters. Rabb injected that YA novels do not even have to center around teen characters.

All five authors have felt a common frustration endured by all childrens’ writers. Though successful in their writing careers, they still face occasional “pity responses” from people who believe that writing for young readers is somehow less worthy than the adult market. The truth is that it is difficult for an adult to tap into their inner child and pour appropriate dialog, situations, and emotional responses into a novel that will appeal to readers far younger than themselves. YA and childrens’ writers are artists who create worlds and characters that young people can relate to. Safe to say that authors of books for young readers write with their heart in the hopes of resonating with their audience.

There are many challenges in writing for teens. Ziegler points to the raw emotions teenagers have trouble dealing with. As she says, the emotional “pendulum doesn’t swing quite so far for adults.” For that reason, YA novels often have deeper emotional content.

Economically, a young adult label can be advantageous in a shaky economy. Major book stores, such as Barnes & Noble, may reduce the number of titles they carry. But, the school library market is always purchasing new books. Librarians are powerful and savvy when it comes to young adult titles. “40% of sales are through the library market,” according to Burg.

Today’s event wrapped up with Q&A interaction. All in attendance appreciated the friendly responses from the panel members. In conclusion, Ms. Bird posed a nostalgic question to the panel. (paraphrased) What advice would you give yourself as a new, as yet unpublished writer trying to break in?

Burg “Hang in there. If you’re writing something good, it will get published eventually.”

Lurie believes she would have made fewer mistakes had she joined a critique group or writing group (like SCBWI) much earlier.

Johnson stressed the importance of thinking long term while make a book the best it can be. And to “not be as hard on myself.”

Ziegler “I would have to tell myself to chill out. You also have to live life. You’re making experiences that later you will draw on.”

Rabb points to the responsibility authors have in providing role models but, in the end, fiction is a place for kids to escape to. Books are a great place to learn about the world through fiction.