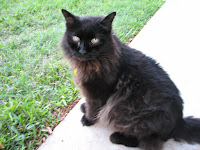 Today, my house looks and feels different. There is no black wreath on the front door. There are no mourners mingling in my living room. But, the garage door lacks the 8-inch opening always left for my cat, Thumper. Sadly, yet inevitably, Thumper reached the end of his nine lives this morning at the age of 17 1/2.

The “end” really began last year when arthritis stole the lightning from his step. Medications became a necessary addition to his breakfasts. Then, the unexplained yowling when he would wander down a dark hall or out of view of one of his humans as if sudden confusion frightened him. Still, I was in denial. Surely, Thumper would be around another few years. So, I kept him patched and pampered. But, there is no reversal for age, and when the kidneys decide to fail, reality hits like a brick. What I can say for certain is that Thumper had a fabulous life.

I can’t honestly describe Thumper as a sweet and cuddly feline always purring and playing. In truth, for his first sixteen years, he was often a psychotic menace. One moment a Norman Rockwell scene of household warmth, the next moment the feline-equivalent of Cujo. Out of the blue, he would even attack the dog. Every one in our family, as well as several friends, have souvenir scars from my beautiful cat. We called him Thumper the Grumper. My neighbors referred to him as “Fangs.”

But, like a crotchety old relative, Thumper remained a beloved member of our family. Especially to me. In fact, he was my longest relationship, with the exception of my family and a few horses currently in their 20’s and 30’s. I loved my grumpy old cat and he loved me. We seemed to understand each other. In the last year, grouchy turned into sweet and he was forever vying for my lap. His biggest concern was that I would sit on him again when he snuck into my black office chair. He blended perfectly.

My tears today come from many levels. I will certainly miss my lovable psycho cat. But, I also realize that Thumper’s loss is symbolic. My oldest son, “J”, was a year old when I adopted the funny black kitten with the green eyes. As a toddler, “J” named him after his favorite Bambi character, then quickly taught the kitty how to “fly” by his tail. Once. No, I don’t blame Thumper’s temperament on my son. They both survived.

The family cat has seen me through the death of my father, a failed marriage, a successful business and its eventual sale, a second marriage, the birth of my second son (who, as a toddler, gave Thumper a bath in baby oil while Mom wasn’t watching,) and the emotions of packing “J” off for college.

I suppose losing Thumper is symbolic of the many chapters that have opened and closed in the past 17 years of my own life. Most importantly, the end of my oldest son’s childhood. AFter all, “J” will be 19 in June. Is it overly sentimental to compare Thumper’s and “Js” lives as a parallel to life in general? Has their chapter come full circle with both leaving my care? At the very least, Thumper has been a constant, with all his unpredictability. And we will all miss him.

Thumper is now buried on the family ranch amid numerous graves of beloved pets who have gone before him. Most of those pets died of old age, just like Thumper.

Quote for the Day: All animals except man know that the ultimate of life is to enjoy it. —Samuel Butler

2 Responses to “Farewell to my furry friend”