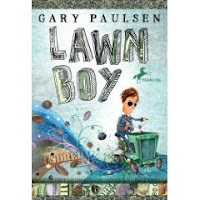 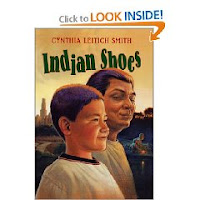 Okay, better late than never. Listed below are some of the books I’ve read in the last week or so. Watch for nonfiction reviews in separate posts.

Recent fiction reads worth picking up:

Bud, Not Buddy by Christopher Paul Curtis (Scholastic, 1999) Fiction (ages 9-12)
Definitely worthy of its Newbery medal. This is a book full of “voice.”
Bud is a ten-year-old African American orphan who, after four years of living in the “home” and in foster care, sets out to find the man he assumes is the father he never met. While clinging tightly to an old ragged suitcase housing his every possession, Bud encounters racial prejudice, the despair of the Great Depression, missed opportunity, kind strangers, and ultimately an unexpected surprise that leads him home.

Indian Shoes by Cynthia Leitich Smith (Harper Collins, 2002) Fiction
This is a charming collection of six interwoven stories about Ray Halfmoon, a contemporary Native American orphan living with his grandfather in Chicago. From the moment Ray trades in his hightops for a chance to give Grampa Halfmoon a pair of moccasins, readers will be charmed by this character. But, Ray is also prone to mishaps that put him into awkward situations. Like showing up as ring bearer at a wedding, but forgetting his dress pants. Through it all, Grandpa Halfmoon is there for him whether it is to rescue Ray from a catastropic haircut, or to share a precious night-fishing trip where the biggest catch had nothing to do with a fish.

Lawn Boy by Gary Paulsen (Random House, 2007) Fiction
My eight-year old son read this book to me. We both loved it. A bonus to the often slap-stick events is the realistic lessons in financial prowess.
When the 12-year old protagonist receives the odd gift of his grandfather’s old riding lawnmower for his birthday, he doesn’t know what to do with it. Until he realizes he doesn’t have enough money to buy a new inner tube for his bike. So, the idea of mowing lawns for neighbors is born. When he meets a down-on-his-luck hippie stockbroker, everything changes for the young entrepreneur. Within six weeks, while the rest of his friends are at sleep-away camp, a lawn-mowing mogul is created with 15 employees and more money than he could ever imagine.

What my Second-grader is reading now:

Freckle Juice by Judy Blume (Random House, 1978)A worthy classic
More than anything in the world, Andrew wants freckles. His classmate Nicky has freckles — they cover his face, his ears, and the whole back of his neck. (Once sitting behind him in class, Andrew counted eighty-six of them, and that was just a start! One day after school, Andrew screws up enough courage to ask Nicky where he got his freckles. And, as luck would have it, who should overhear him but giggling, teasing Sharon (who makes frog faces at everybody!)


What I am reading now:

Outliers: The Story of Success by Malcolm Gladwell (Little Brown, 2008) This is an adult book highly recommended by my hubby and currently number one on the NY Times Best Seller List. More on this title in a future post.

Quote for the Day: “It’s funny how ideas are, in a lot of ways they’re just like seeds. Both of them start real, real small and then…woop, zoop, sloop…before you can say Jack Robinson they’ve gone and grown a lot bigger than you ever thought they could.”— Gary Paulsen (from his book, Bud, Not Buddy)