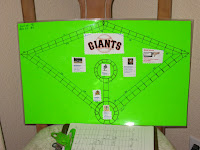 Hello fellow bloggers. Long time no see. While not blogging for the past several months, I’ve been busy writing, rewriting, participating in an online class, rewriting, dancing with my dream agent, and yada yada yada. The yada I refer to relates to other obligations. Like family. I’m often shocked at the benefits of pushing away from this computer and out into the world of kids. It feeds me in many ways.

Having a nine year old Renaissance-man-in-the-making is such a daily blessing. Currently, Kiddo is enjoying his second season of baseball. College son was a soccer player for fourteen years, so this is foreign territory for me. The season is almost over and I’m grinning ear to ear.

I’ll admit upfront that I did NOT volunteer to be team mom for this group of ten boys aged 8-10. I’d been there and done that too many times to count. This time, I recognized my over-doer tendencies and chose not to add mental distraction that might slow my writing momentum.

What does all this have to do with motivating kids? Read on.

We landed on a team with a very experienced coach who is passionate about baseball. Now that can be both good and bad to a bunch of kids. Coach introduced himself as being all about teaching fundamentals. Great! Doesn’t care if we win or lose. Uh huh! Just wants the boys to have fun. Sounds good!

The other side of a coach’s words is his coaching style. With all his good intentions, Coach is a bit overbearing during the games. Too little focus on what they’re doing right and so very much attention on errors. Errors are simply mistakes, aren’t they? Don’t we all make mistakes and don’t we all beat ourselves up for them? Like so many kids’ teams, errors were initially punishable by the threat of running laps or dropping for push-ups. Why? Enter my baseball newbieness and motherly instincts.

We haven’t won a game yet, but that’s not what got my goad when the baseball hit the fan last week. What bothered me was seeing kids in tears when they made a mistake and tantrums when they struck out at bat. There’s a very basic rule of motivation that seems to be lacking on sports fields. We move in the direction of our thoughts. Pour negativity into a bunch of kids and you’ll get negative performance and behavior in return. And, at the end of the day, isn’t this supposed to be a fun game?

So, what’s a mom to do? Glad you asked. In this situation, I was fortunate to have a coach willing to listen and keep an open mind. I offered my suggestions in the most humble manner I could muster. Something along the lines of, “I’m still pretty new to baseball, but it seems to me…” Coach listened to my concerns about all that negative feedback he doled out. I listened to his frustration about the team’s endless errors. In the end, he agreed to consider that just maybe if we shine the light on what the kids are doing well, they will want to do well more often. To his credit, he was willing to buck his years of routine to allow an experiment.

I would come up with a reward system for the boys to take that spotlight off of the mistakes and shine it instead onto the successful skills. Even more importantly, to change the boys’ attitudes-to pull them up from emotional self-defeat to one of team spirit and fun. In exchange, Coach agreed to tweak his verbal exchanges during the game. I threatened him with Duct tape.

Kiddo and I brainstormed something motivational. Something the boys would have fun with. Something that would get them excited about doing their very best. It came down to a second fundamental; kids are competitive. What we came up with was a simple board game. Designed in the shape of a quasi-baseball diamond, we boxed in seventy-seven spaces (we had no benchmark to know how far they would advance.) We sketched out a point system whereby every successful skill demonstrated advanced the team on the game board a set number of spaces. Every player had a chance to advance the board. The only way to lose spaces related to attitude. Lose your temper- back 2 spaces. Bad attitude or unsportsmanlike conduct-back 2 spaces. Bonus points would be awarded for team spirit, exceptional plays, positive attitude.

Game Day One- Coach gave me a few minutes to talk to the boys. “Who wants to have some fun?” Ten baseball caps leaned closer in, twenty cleats shuffled in excitement. I went over the rules, debuted the game board, and held out the potential rewards. Ice cream. Pizza. Team outing to a Longhorn game. “You cannot win this game without a positive attitude.” They zeroed in and their faces lit up. The game was on.

The coach held his tongue. Between innings, ten kids crowded the dugout. “How far have we gone?” The spaces filled in until 41 of the 77 boxes were blacked out. They cheered for each other, patted each other on the backs, and never once asked about the score, which had nothing to do with their motivation. They were on fire! We still had the problem of over-throw errors, but that had nothing to do with this motivational game. Ultimately, they did not win the ball game, but they won their confidence back. They could see what they had done well and they could hear the praise from the parents. They were motivated and they left the field with smiles. Mission accomplished.

Last night was Game Two of our experiment. I had laminated the game board and added something new. “I’ve added a point for every successful player-to-player throw. That means before you throw the ball, take a split second to concentrate on accuracy.” Lo and behold, the over-throwing errors practically vanished. By the fourth inning, all 77 spaces on the game board were filled. I added spaces to accommodate their continuing progress. The boys were ecstatic. “What happens if we make it around twice?” They lost the game. Barely. But, they watched their success grow from 41-87 spaces. Did they learn some profound skills in a week’s time? No. They just tapped into the power of positive thinking.

As for the coach, I’m proud of his willingness to be open-minded. To be coached, in some ways. He’s asked that I continue with the game board.

We’ll talk about it a bit more tomorrow night. The boys have earned a pizza outing.

One Response to “Coaching a Coach: What motivates kids?”