Posted on November 23, 2010February 7, 2018
Marc Tyler Nobleman is the author of 70 books for children, both for educational and trade publishers. His recent picture book, BOYS OF STEEL: THE CREATORS OF SUPERMAN has been widely applauded, with starred reviews by Booklist, and Publisher’s Weekly, and named a Kirkus “Best Children’s Book” of 2008. 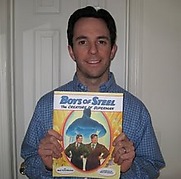