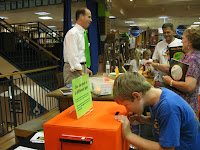 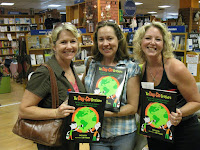 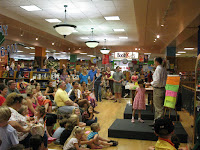 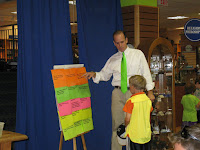 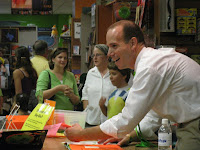 photo descriptions- 1.) My son peeks into the black-light viewing box to see the Day-Glo book illustrations literally glow 2.)Donna Bowman Bratton (L), Jenny Ziegler (c), and Carmen Oliver (r) holding signed copies of the book 3.)One angle of the room 4.)Interactive question and answer session with the kids 5.)The happy author signing for a fan-with fluorescent pens of course.

Chris Barton’s much-anticipated book signing for his debut picture book, The Day-Glo Brothers: The True Story of Bob and Joe Switzer’s Bright Ideas and Brand-New Colors was-ahem-a glowing success. As you can see in the photos, the turnout was incredible.

The first thing I noticed as I ascended the stairway to Book People’s second floor, was the neon colors splashed everywhere. The edible treats and punch, the kids’ craft table, the black-light viewing box, even Barton’s own tie was an unmistakable Day-Glo color. The countless children in the audience were mesmerized by it all.

Before engaging the audience in a well-planned question and answer activity, he shared the story behind the writing of this book. He was inspired by a 1997 obituary of one of the Switzer brothers, which gave a brief history of their famous invention. The story stuck with him for several years before Barton decided to try his hand at writing a children’s book about the topic. The surviving Switzer family members were apparantly thrilled by the prospect of sharing their loved ones’ story with young readers, so they offered the most valuable of sources for Barton’s research. For further information about his inspiration, refer to Cynthia Leitich Smith’s recent interview as mentioned in my most recent blog post.

There are several reasons to pick up this book: If you’ve ever wondered who invented the fluorescent colors seen on everyday objects like highlighters, traffic cones, and safety vests (not to mention the iconic colors of the 60’s); If you are a writer or teacher interested in dissecting the structure of a successful nonfiction picture book; For the fun retro-style illustrations by Tony Persiani that actually glow under black light; or to be entertained by the true story of a little slice of Americana as told by a delightful author.

Here’s a little peek- “Bob wanted to make his fortune by becoming a doctor, and Joe wanted to make his mark on the world through magic. At first it may seem that neither brother ended up where he wanted to be. But in that darkened basement, the Switzer Brothers began to look at the world in a different light.”

Chris Barton began writing this book eight years ago and, admittedly, learned a great deal in the process. Amid the 23 publisher rejections, he whittled the story down from its original 6200 word count. Writers will understand the painful process of cutting details from a manuscript that is as much a part of you as your children. Charlesbridge Publishing picked up the book in 2004 and the long wait to publication began.

Keep your eye on author Chris Barton (www.chrisbarton.info) who has several other books on the way. His next book, Shark vs. Train will be released in 2010.

One Response to “Chris Barton’s Day-Glo Brothers- What an Event!”